--Since the COVID-19 outbreak, the freight trains have been playing a crucial role in supporting Europe's anti-epidemic fight by opening "green passages" for the transport of important supplies and raw materials.

--Beyond the contributions to underpinning anti-pandemic actions, the rail connection between China and Europe, since the restoration of its regular operation, has also brought an impetus to economic resumption in the Eurasian continent amid the pandemic by stabilizing trade and supply chains.

--Amid efforts to expand common interests in China-EU cooperation, the China-Europe rail transport service, which was initiated in 2011, is widely expected to play an increasingly important role in the post-pandemic era. 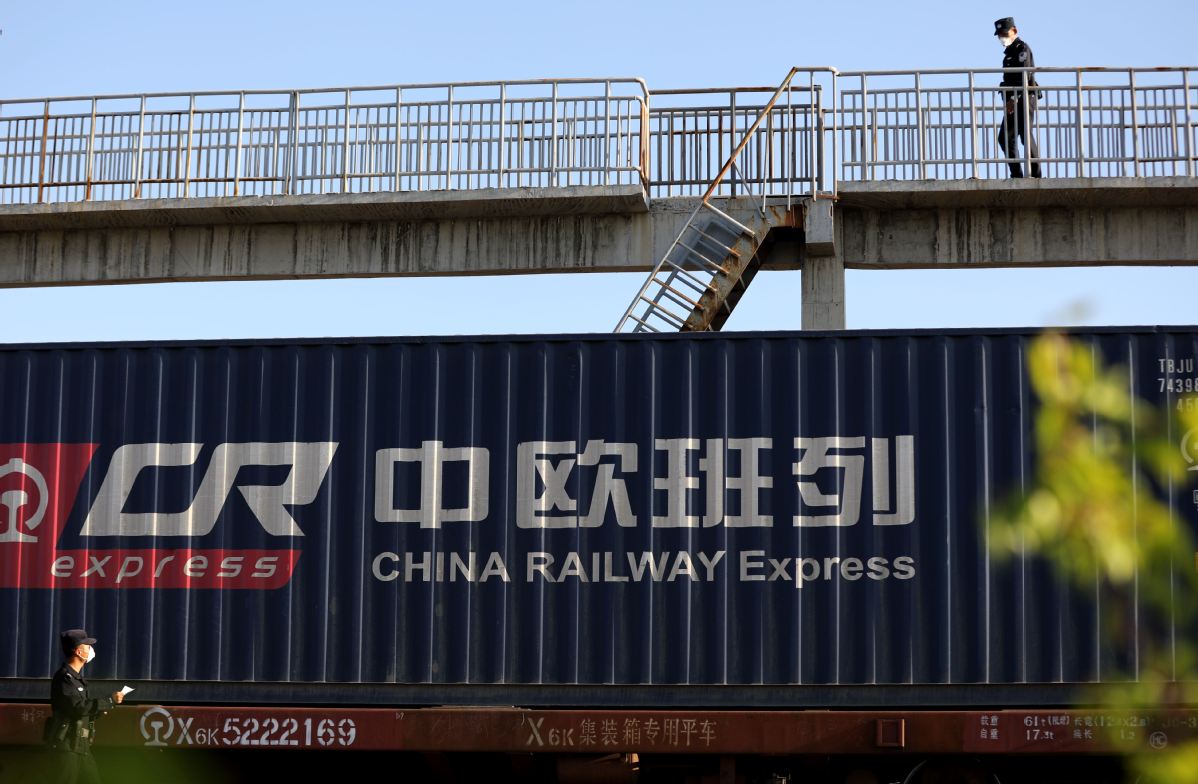 Among many China-Europe express operations for transport of much-needed medical supplies since the COVID-19 outbreak, this train had run over 11,920 km through seven countries before delivering some 20 million surgical masks and gloves, water-soluble bags, contactless gel dispensers and other resources, which marked the first dedicated rail transport of protective materials directly from China to France amid the pandemic.

In the meantime, two additional China-Europe freight trains carrying anti-coronavirus supplies are on their way to Duisburg, Germany, and Madrid, Spain respectively, expected to arrive on Saturday and Monday. 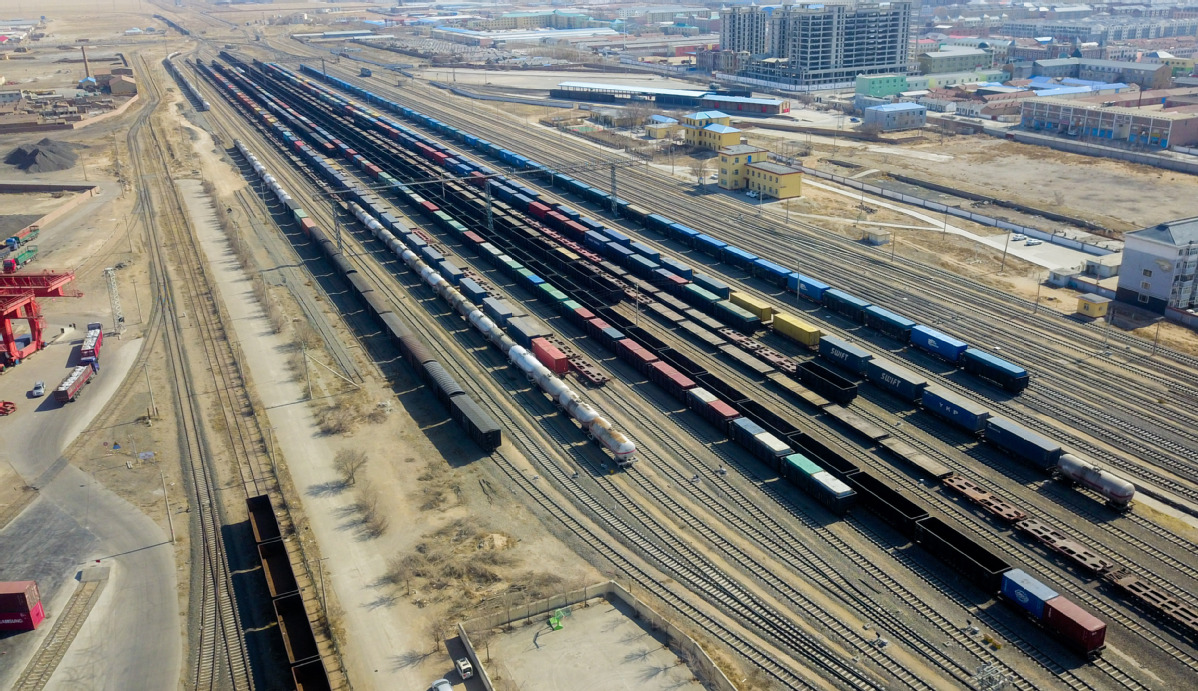 Aerial photo taken on April 11, 2020 shows a logistic station of the Erenhot Port in north China's Inner Mongolia autonomous region. The port has handled 379 China-Europe freight trains in the first quarter of this year. [Photo/Xinhua]

Since the COVID-19 outbreak, the freight trains have been playing a crucial role in supporting Europe's anti-epidemic fight by opening "green passages" for the transport of important supplies and raw materials.

From January to May, a total of 12,524 tonnes of anti-epidemic materials were sent from China to European countries by train.

Lyazid Benhami, vice-president of the Paris Association of French-Chinese Friendship, was delighted to witness the arrival of the "medical train" from China.

"In this period of health crisis, we are pleased to note that this important volume of materials transported (to France), including 20 million surgical masks and protective equipment, is up to meet the demand and needs of consumers and the market," he said.

The smooth operation of this anti-virus supply train has proven the feasibility, punctuality and safety of this land corridor with lower delivery costs than air freight, but less time consumption and more flexibility than sea freight, said Yao Hongzhi, general manager of COSCO Shipping (France) Agency.

Carrying 35 containers of COVID-19 control and prevention materials, all of which were manufactured in central China's Hubei Province, a freight train from Wuhan, the provincial capital, is expected to arrive in the western German city of Duisburg, a logistics hub in central Europe on Saturday, before running further towards Hamburg. 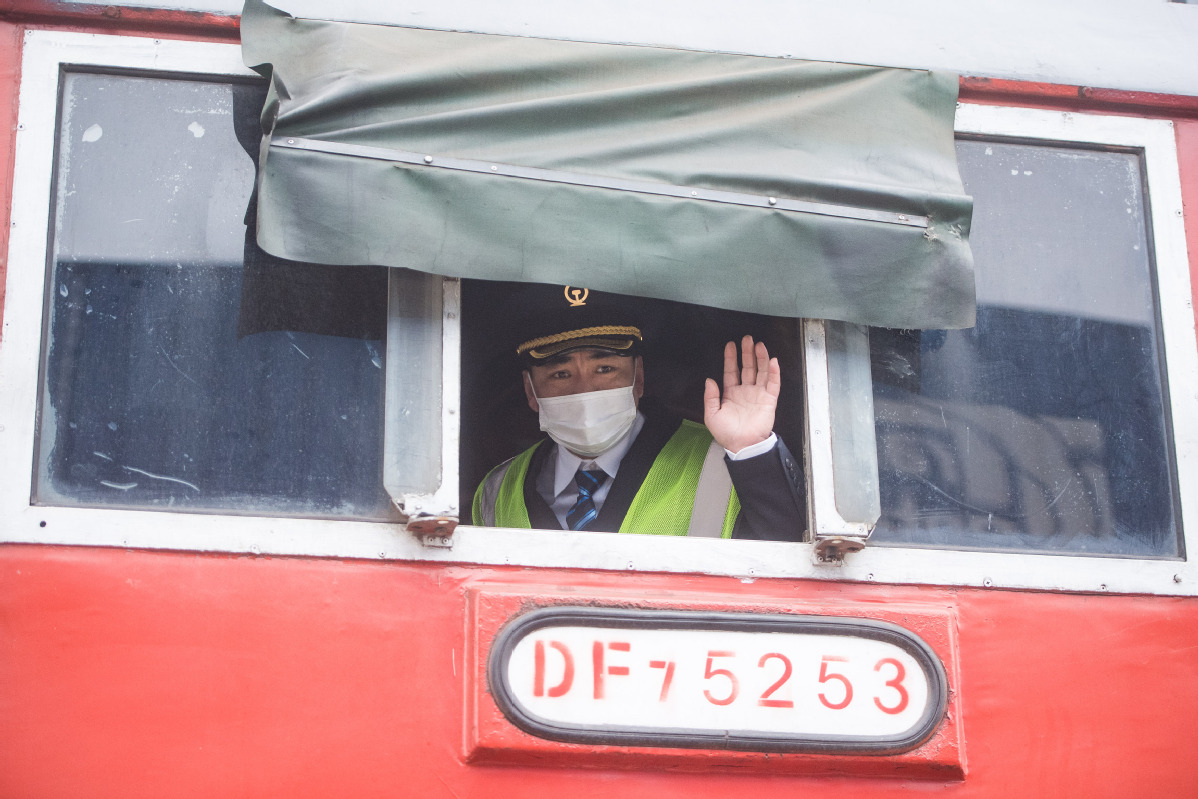 "The original mode of transportation was container shipping to Europe, but now the products need to be delivered as soon as possible," said Gao Zandong, deputy general manager of COSCO Shipping Lines (Wuhan).

Gao noted that only a little bit more than 10 days were needed to transport much-needed medical materials from Hubei to Germany.

On June 29, Madrid will also greet a freight train from the city of Yiwu, east China's Zhejiang Province, carrying 86 TEUs with about 257 tonnes of cargo, including 25.05 million face masks and 400,000 protective suits.

Carlos Santana, who is responsible for the company which operates the Yiwu-Madrid line in Spain, told Xinhua that railway transport has been proven to be a reliable means of importing health materials from China in the midst of the pandemic. 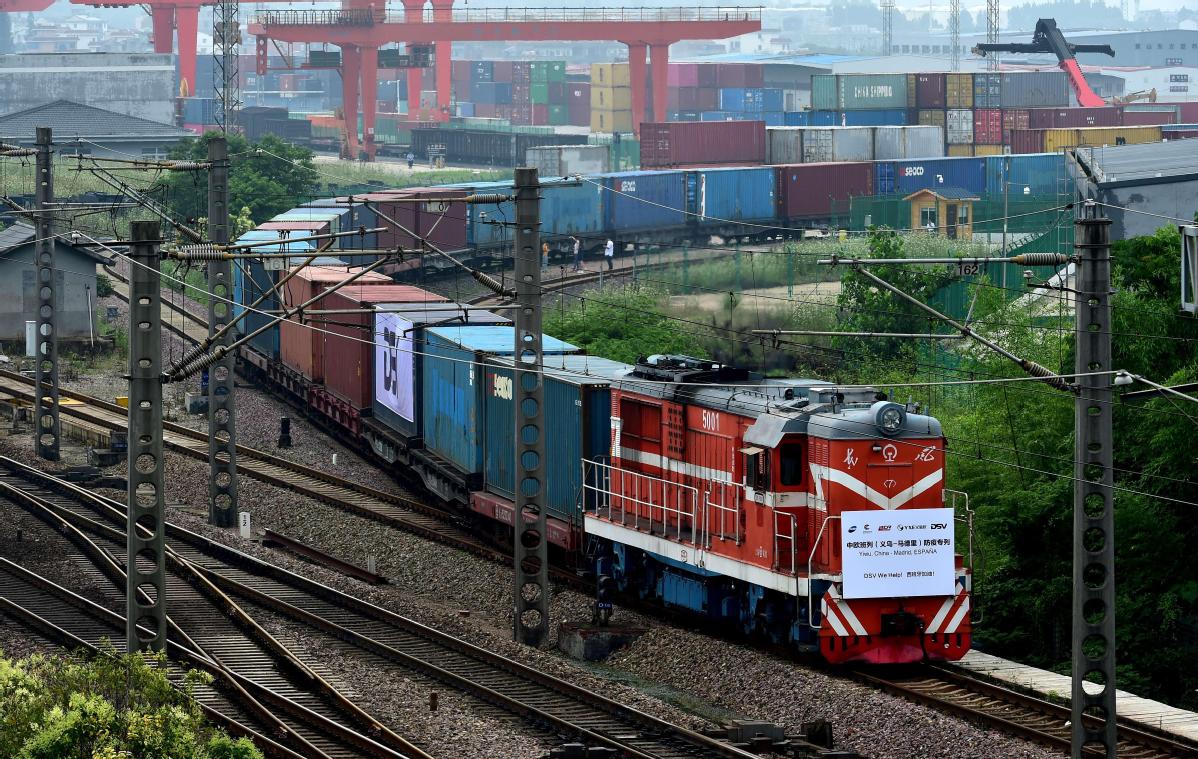 Beyond the contributions to underpinning anti-pandemic actions, the rail connection between China and Europe, since the restoration of its regular operation, has also brought an impetus to economic resumption in the Eurasian continent amid the pandemic by stabilizing trade and supply chains.

From January to May, the number and shipments of China-Europe freight trains surged by 28 percent and 32 percent year-on-year respectively, according to the China State Railway Group.

China-Europe freight trains open an opportunity for boosting trade between France and China, Benhami noted, adding that "the 'win-win' approach is very real for everyone, including the environment, businesses and consumers."

Xulio Rios, director of the Observatory of Chinese Politics in Spain, said the railway connection between Yiwu and Madrid offers an important route for goods traffic, from medical materials to items for everyday use during the ongoing COVID-19 crisis.

From Spain, he added, top-end consumer goods like extra virgin olive oil, wine and cured ham are brought to China by rail as well, with clear advantages of being speedy, ecological and cost-effective.

Laszlo Mosoczi, secretary of state for transport policy at Hungarian Ministry of Innovation and Technology, said that "as a transit country, Hungary benefits from freight traffic from Asia to Europe, and Hungary can become the logistics center of the region." 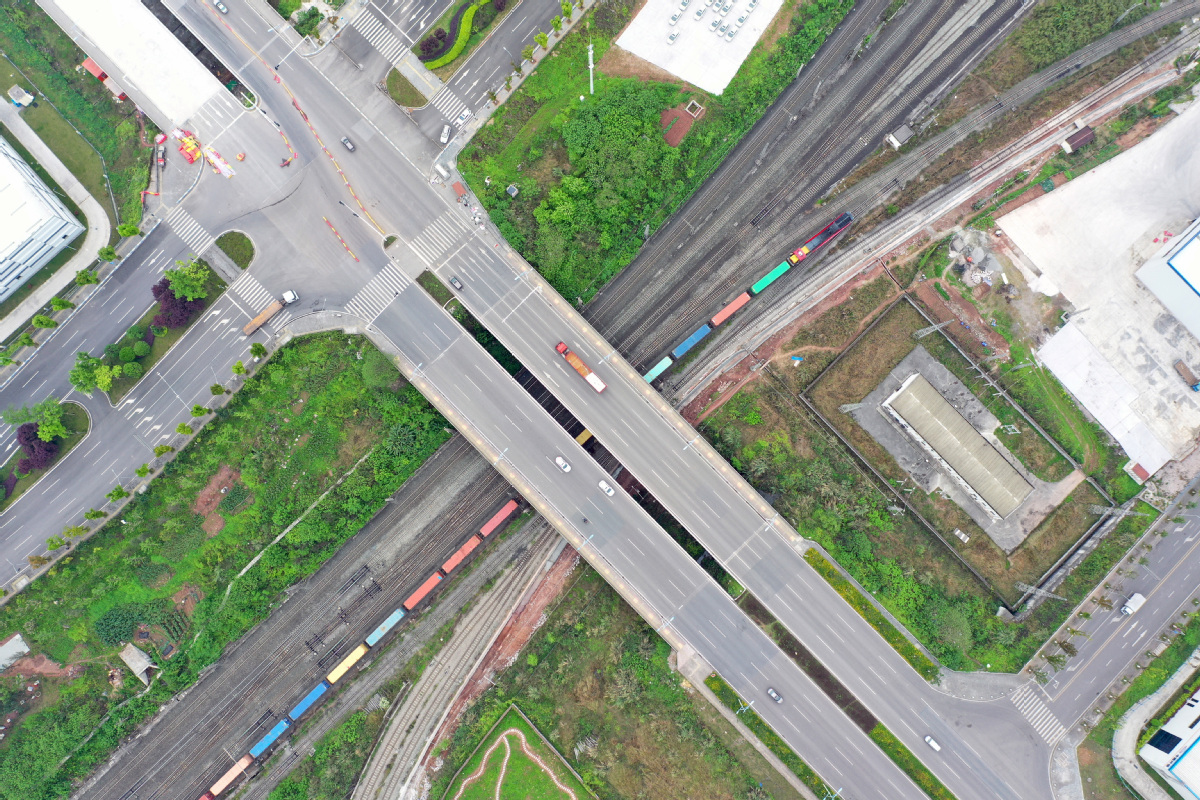 China is willing to join hands with the European side to push for a more stable and mature relationship in the post-pandemic era and lift bilateral ties to a new height, Chinese President Xi Jinping said Monday when meeting via video link with EU leaders.

"Our two major economies should play the role as dual engines of the world economy, drive the recovery of global economy, jointly support a scientific and orderly resumption of work and production, strengthen macroeconomic policy coordination, and keep global industrial and supply chains stable and smooth," Xi said.

Amid efforts to expand common interests in China-EU cooperation, the China-Europe rail transport service, which was initiated in 2011, is widely expected to play an increasingly important role in the post-pandemic era.

The freight trains that link China and Europe have become a symbol of mutual benefits, said Rios. 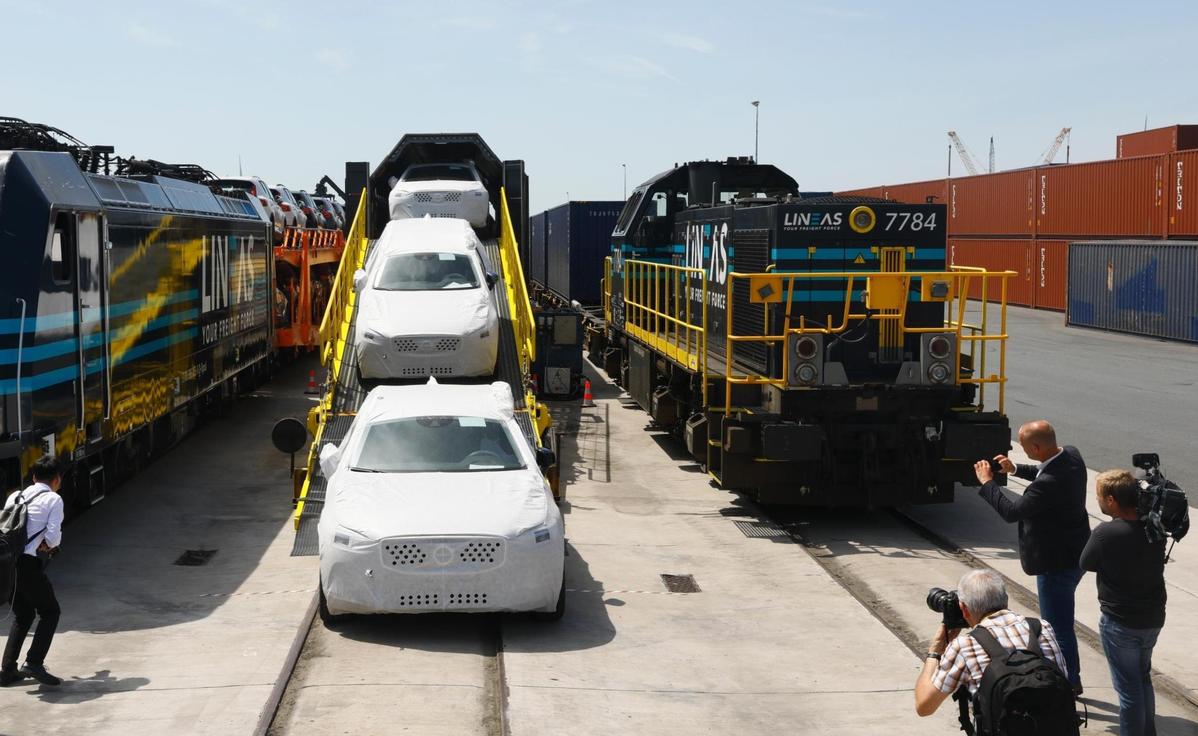 Chinese-made Volvo XC60 vehicles exported to Europe via China Railway Express (Chang'an) are seen at the Port of Ghent in Belgium on July 4, 2019. [Photo/Xinhua]

"If we refer to the ongoing Belt and Road Initiative, we notice that the land route brings hope for both French and Chinese companies," Benhami said, noting that the initiative brings new opportunities of economic development.

The Yiwu-Madrid line can play an important role in cross-border e-commerce between China and Spain, Wu said.

He stressed that local governments and companies in Spain have shown a positive attitude toward strengthening cooperation on Yixin'ou cargo line (Yiwu-Xinjiang-Europe) by expanding exports to China in a more convenient manner.

"And we wish to work with China on the development of freight wagons with variable gauge capable of adapting to the situation in Western Europe, Russia and China. In a few years, we will be able to connect China and Europe in 10 days," Wanderpepen added.